The first scene of the film is a medium shot of our protagonist, the eponymous character, Charlie. Soft music underscores this opening scene as audiences are introduced inside Charlie’s shack. This melodic music accompanies Charlie’s interactions within the surroundings of his home. He is sits in his bed, Charlie retrieves an old photograph and a pair of reading glasses. 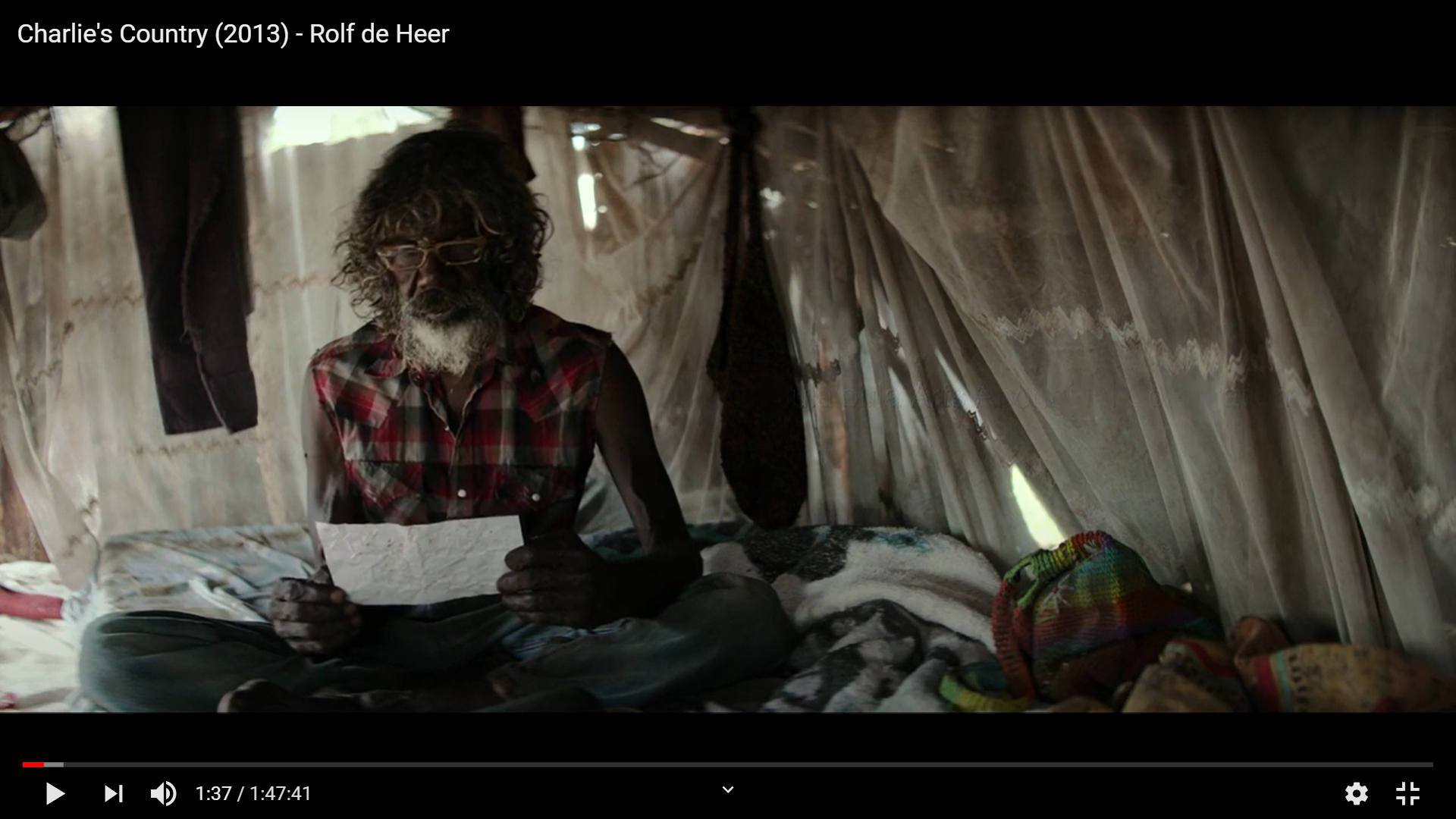 The mise en scene of the film accentuates the visual importance of the photo to Charlie. The white photo is contrasted strongly against Charlie, whose black skin accentuates the juxtaposing colours. Furthermore, the walls of Charlie’s shack is also white thus additionally contrasting Charlie’s black skin. Foreshadowing future themes of white domination, Charlie is a black man trapped in white picture. 2 minutes of Charlie deeply looking at the picture show audiences an innocent, almost naïve, person.

After a tracking shot of Charlie leaving his home and crossing the street, a framing shot establishes Charlie’s community. Extremely underdeveloped and lacking infrastructure, audiences can understand that this a rural and isolated locale.

As Charlie walks by a police station, he stops and starts shouting in a non-English language. In an over the shoulder shot a white police officer walks to the door and casually slouches upon its frame. Charlie shouts “G’day Luke … you white bastard”, to which Police Officer Luke replies: “G’day Charlie … you black bastard”. As this is said both men burst into humour, the dialogue showcases their racial humour born from mateship. They both wish another a good day as Charlie continues on. 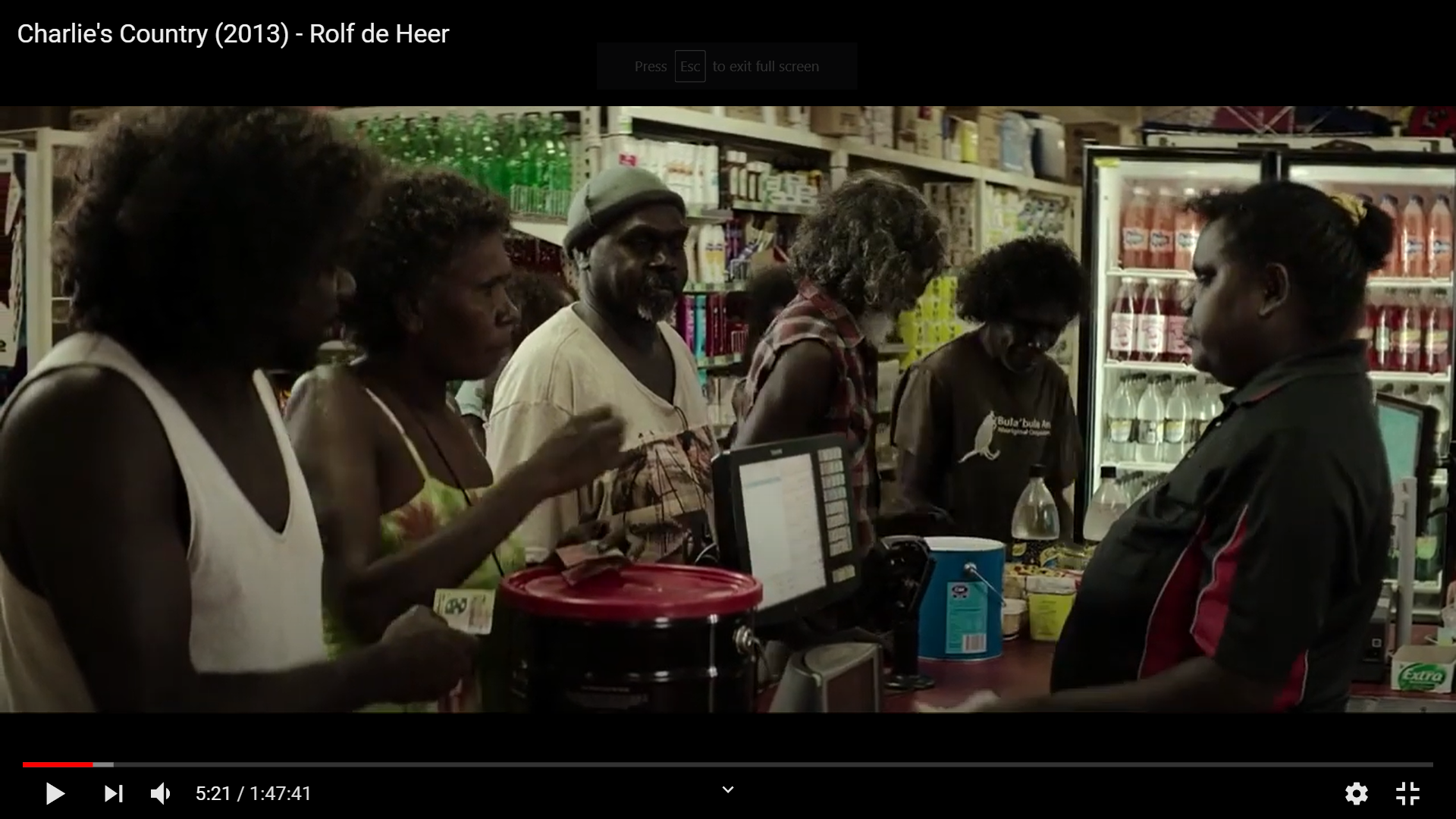 The scene jumps to a more urbanised location within the community as Charlie collects money from a bank teller. As quickly as he receives the money, he distributes it to other members of society. This kinship form of wealth distribution is demonstrated when a woman is offered money to pay for her groceries. The wide shot also focuses audiences on the fact that people within this community are predominantly black. This is only the first example of black people helping each other as this film reminds educates viewers on how Aboriginal kinship society works – family help each other out.

As Charlie ends his day, he builds a fire in front of his shack. The camera moves from a wide shot to a close up as Charlie starts tossing cigarettes into the fire. Afterwards, there is a montage of Charlie looking sad as he observes the world around him. This can be interpreted as director de Heer’s acknowledgement of the fact that rural poverty is systemic for many Aboriginal people. 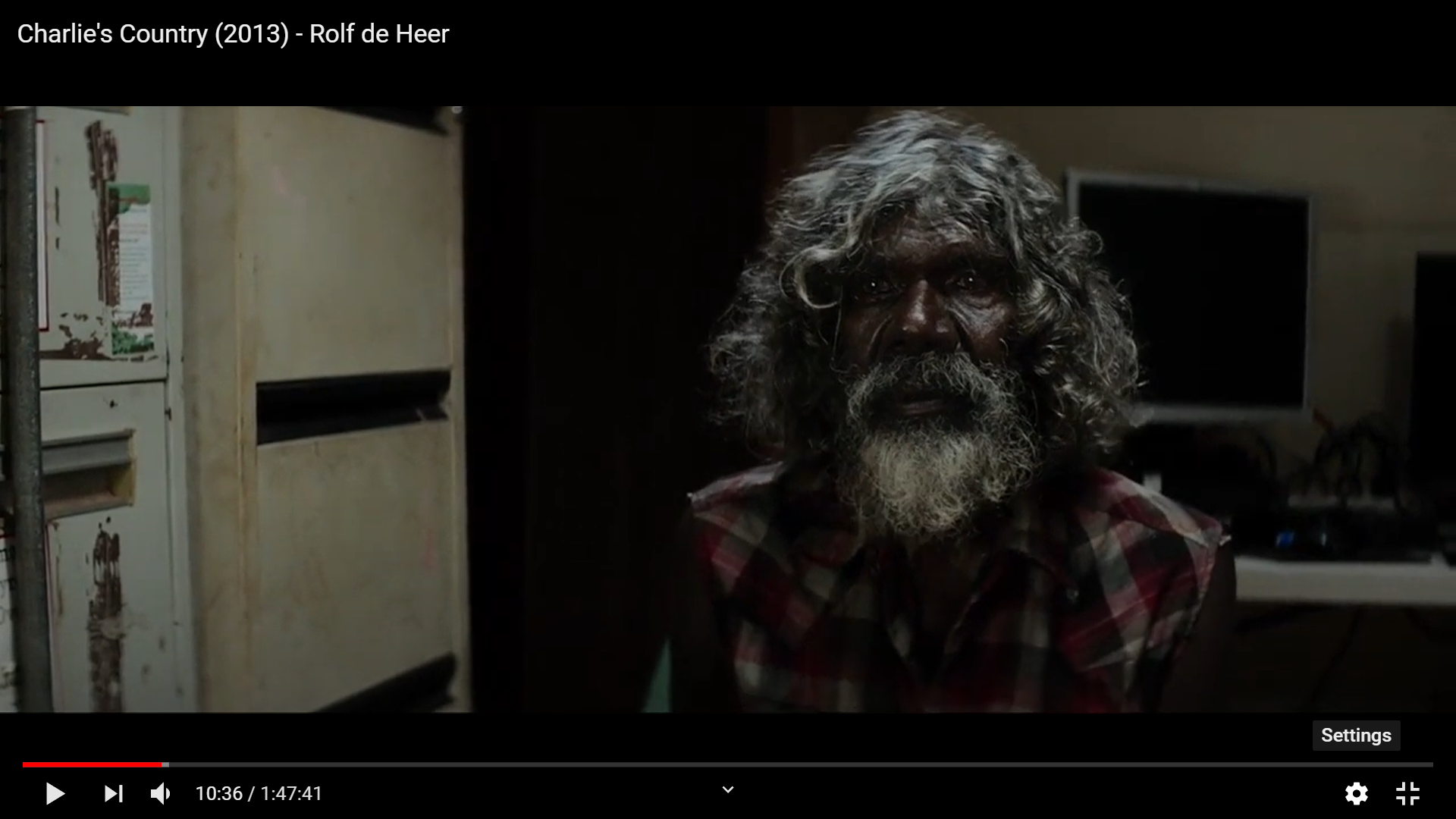 In the following scene Charlie privately meets with Errol, a government worker, and ask for a new home. Charlie complains how his current house has become overcrowded with family and that he wants another “good house”. Through a series of reverse shots he is refused, lamenting at his low social economic status Charlie despairing ask: “where’s my house? where’s my job?”. A black man ask for a home and the white man says declines, this is where the director begins to show audiences that racial inequality is still endemic within Australia. The lighting of this scene further heightens Charlie’s impoverishment as the harsh artificial illumination highlights his thin frame and white hair. 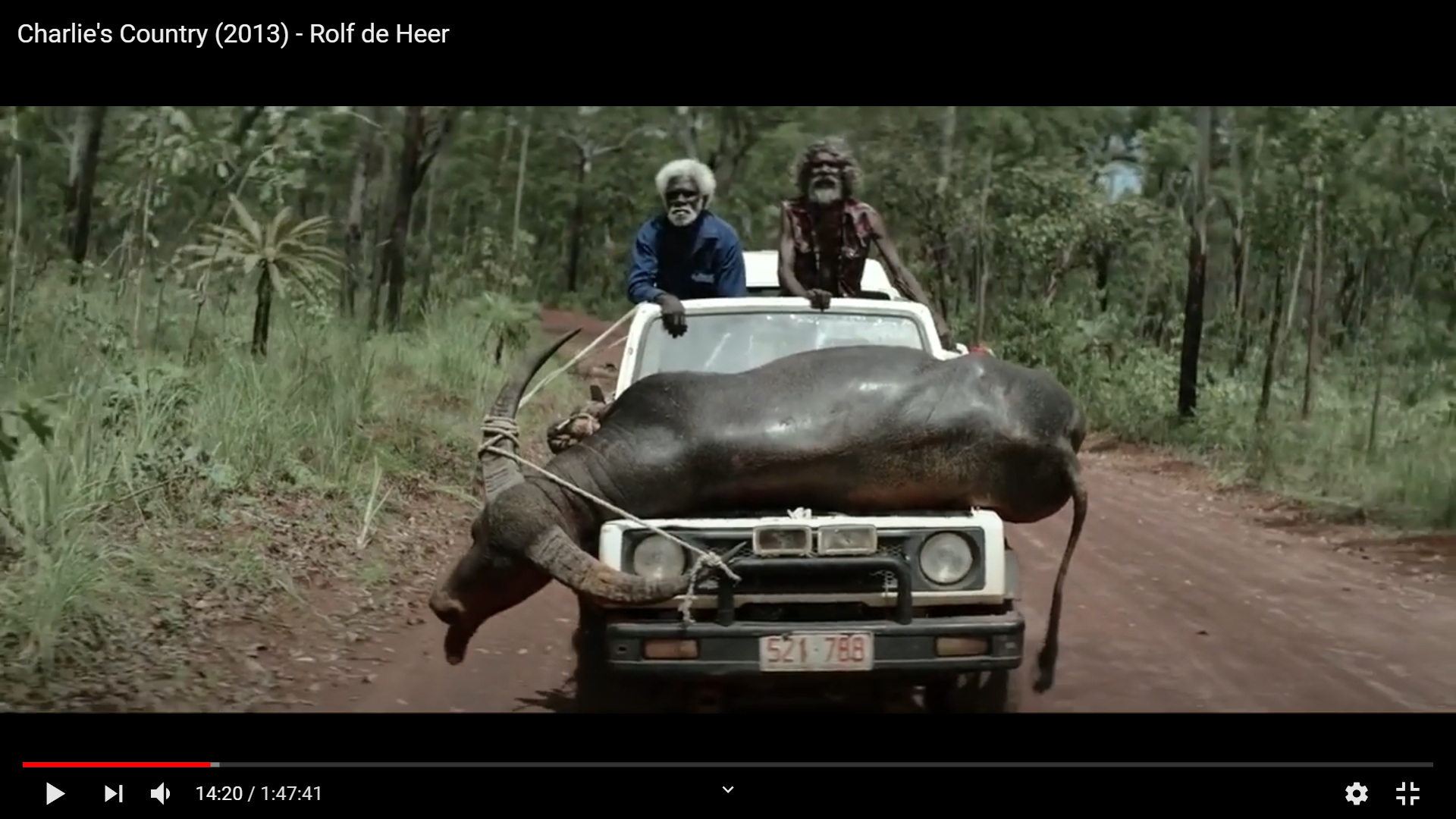 In the following scene audiences are properly introduced to Black Pete as he and Charlie go hunting. Always trying to make each other laugh, viewers quickly understand that these two are extremely good friends. Together, they manage to hunt a water buffalo. The wide shot of them carrying home their kill on top of Pete’s car will be Charlie’s highest point of the film as the future events of the film will push him to his limits. 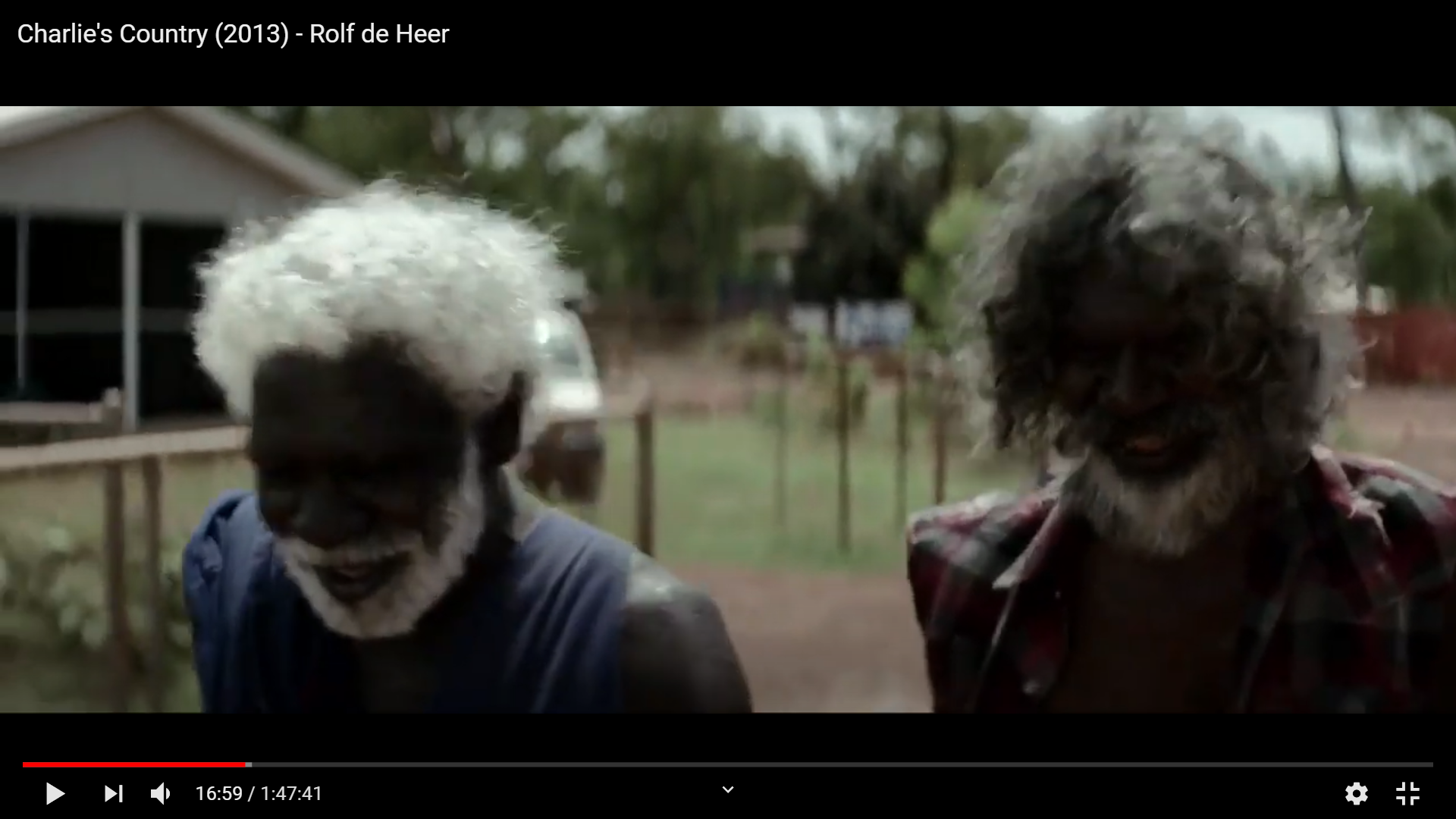 Immediately afterwards the pair encounter a duo of police officers, one black and one white. Finding unlicensed firearms inside the car, the police impound Pete’s car, along with the pair’s water buffalo. In a tracking shot of both men leaving the police station, they laugh with one another, reaffirming the importance of good friends when overcoming adversity.

After the impounding of Pete’s car, Charlie helps some drug dealers find a hideout and is compensated with cannabis. This criminal act foreshadows Charlie’s future disregard for the rule of law. Following this, Charlie and Old Lulu gather around a fire in front of Charlie’s shack. In a series of reverse shots, both men talk in their native language before interrupted by the Lulu’s phone. Although an elder in the community like Charlie, Lulu smokes tobacco and uses a mobile phone, two things that Charlie does not do throughout the film. 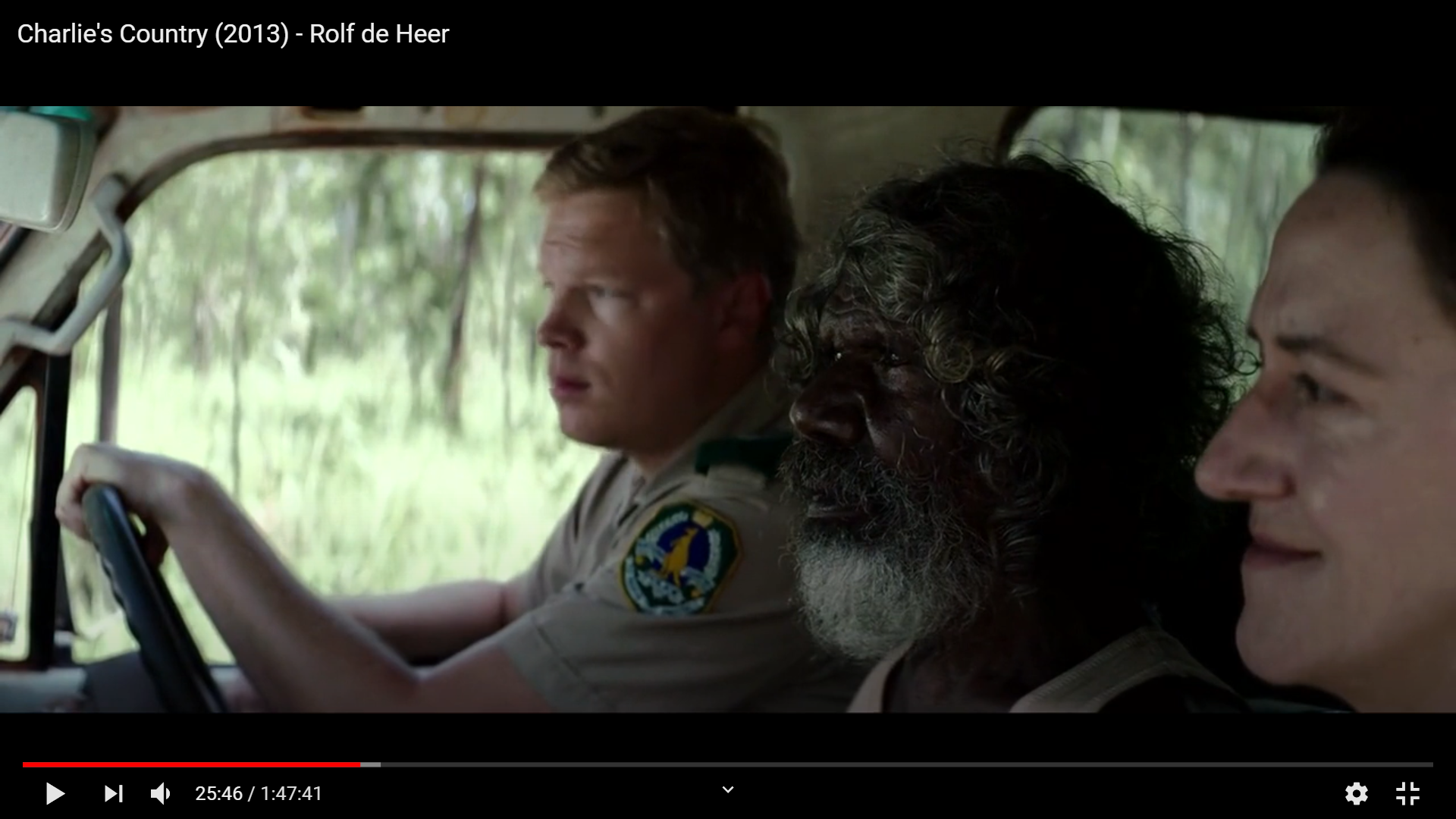 In the next scene Charlie smokes some cannabis but is interrupted when the police come to find him. Luke says that they want Charlie’s help in locating a group of drug dealers who have recently arrived in a locale – the very same drug dealers Charlie previously assisted. Reluctantly agreeing, Charlie helps Luke in finding his former associates. In a medium shot inside the car, Charlie is stuck in the middle of two white police officers. This visual imagery highlights Charlie’s relationship with white society in general, he is different and surrounded by people he cannot trust.

Previous project PrideNext project Like a House on Fire